Although we’re interior designers, we naturally love everything that has to do with design. From furniture to fashion, magazines to museums, we notice the colors, the patterns, the positioning. So when I attended Boston’s Museum of Fine Arts exhibit, “Hollywood Glamour, Fashion and Jewelry from the Silver Screen,” I was enamored.

As the Museum describes it, “The exhibition focuses on the iconic style of sultry starlets of the period, including Gloria Swanson, Anna May Wong, Greta Garbo, Marlene Dietrich, Mae West, and Joan Crawford. Hollywood style in this era was a blend of on- and off-screen fashion and accessories, including dramatic costumes created for the screen by famous designers such as Adrian, Travis Banton, and Chanel and dazzling jewelry from makers of the era like Trabert & Hoeffer-Mauboussin and Paul Flato. Along with eye-catching gowns once worn by famous figures and the sparkling jewels that contributed to their allure from the MFA and private collections, photography by Edward Steichen along with period photographs, film stills, and film clips capture the style of the silver screen era.”

What a wonderful era! The luxurious fabrics used in the gowns were enough alone to make me swoon. And as a designer, I noticed the intricate construction that went into each one – using the richest of fabrics like velvet, chiffon and silk. But there were limitations to what they could do because of the nature of the entertainment industry’s film technology at the time. For example, they didn’t wear white because it caused a halo effect on screen. The fabrics were actually chosen because of their “quiet ability.” Some fabrics were simply too noisy and would interrupt the sound quality of a film. The exhibit also discusses how much research went into these beautiful ensembles to ensure that they would look good not only on the starlets, but on the silver screen. (Not that different from today, I suppose!) 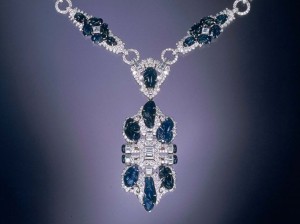 The shoes and the jewelry are just as divine. But the most surprising elements were unexpected. Take, for example, the “hidden platform” shoes worn by Mae West. She was reportedly only five feet tall, and so would wear these special shoes to add height, but the majority of the shoe would be hidden under her gown, with a construction that looked more like two shoes on top of each other.

The jewels were oversized – sort of like what we’re seeing in today’s costume jewelry. But, much of it was “convertible jewelry” – allowing pieces to be broken down and worn in two different ways. I thought that was amazing!

As a designer, the intricate details of what went into the design were so intriguing. But anyone can appreciate the history and mysterious glamour behind this exhibit. I highly recommend attending. But hurry, it’s only here for about another month. The exhibit ends on March 8, 2015. You may also want to check out the Artists Demonstration, “Hollywood Fashion Design,” an ongoing program where you can try creating your own Hollywood-inspired design. The next session is Wednesday, February 25th.

NOTE: The exhibit is sponsored by the ever-glamourous Neil Lane Jewelry.